Written by Thrishika Kanthraj
Imagine a limitless supply of worry. Imagine a piling stack of problems if you will. And then imagine a single, bony, 35-year-old woman at the center of it all, fighting from the front.
We met with Krishna Devi at her house in Sitamarhi in Bihar on an arid afternoon. She lives with her three children - Vikas, Mansa and Prins - while her husband is often away finding work in distant Punjab. Much like herself, the house has also seen its share of struggle.
Three years ago, Krishna Devi was newly married to her husband. She availed a loan of Rs. 29,000 from a local money lender to purchase an open plot on which to build her home. Although the house has been built, she is still caught in a cycle of debt as she has repaid interest on the loan which amounts to Rs. 150,000, five times the amount of the initial loan. Furthermore, she still owes him the principal and continues to pay interest.
Tormenting recovery agents and admonishing neighbours are a routine affair in her life.
Even Krishna Devi’s husband has struggled in recent years. Working for a paltry Rs. 2,500 per month, he has to pay nearly a fourth of his daily wage to middlemen who helped him get labour-related assignments in Punjab.
"Mainey aapko bulakey leke aaya. Maine aapko kaam dilwaya. Isiliye mujhe paisey chahiye," the middlemen would say.

Krishna Devi even narrated to us the story of a time when she had to travel to Nepal with little money on her person in order to show a proof of her husband’s identity at the border to bring him back to India!
Despite these unfortunate incidents, Krishna Devi decided in September 2015 to support her husband by augmenting the income of the family through the purchase of a buffalo. Despite the constraints of a lack of capital and a relative lack of experience (she only learnt from watching her mother milk cows), she strategically took out two loans to cover the cost of the buffalo – one from Rang De and another from a moneylender for Rs 10,000 each.
She told us the logic – by paying a nominal interest rate for the Rang De loan, she thinks she can balance out the high interest payment to the moneylender. However, given that her buffalo is young and yet to yield milk and income, her travail with the money lender continues unabated.
Stories abrim, we left her as she told us of her desire to be mentored so that she can learn on how best to tend to the buffalo and get more information on vaccination procedures.
Pramod left Sitamarhi with a heavy heart. Still, despite the sad tale, he saw grit belying the tears in Krishna Devi’s eyes.
We hope that Krishna Devi sees a happy and well deserved turn of events. Life has been harsher for her than most.

To lead a comfortable life, Krishna Devi wishes to work hard and increase their family income. She belongs to a village of Sitamarhi, Bihar, and her family includes her husband and three children. Her husband works as a labour and she herself also works as an agricultural labour during farming season to supplement family income. Krishna now wishes to earn additionally by starting a cattle rearing activity through a Rang De loan. She plans to earn income by selling milk in the local milk collection center. So, she has high hopes from this funding which will help her in establishing the venture and fetch some additional income for the family. Krishna wishes to buy a buffalo with the Rang De loan money to start the venture. 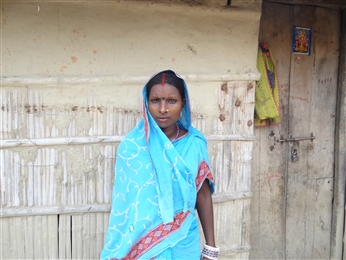 Evaluated 2358 days ago by Pramod