Written by Thrishika Kanthraj
The rivers in Bihar change their course often, displacing families that live in close proximity. In and around the village of Bhanaspatti where the Kosi river flows, nearly 200 families have been displaced.
In addition to natural causes, people of this region are constantly on the move as there are few livelihood opportunities. There are almost no working men in the village as many migrate to nearby towns in search of work. This forces the women to depend entirely on remittances from husbands and children, or to undertake income generating activities of their own.
56-year-old Shanti Devi chose the latter. In her association with Nav Jagriti, a Rang De impact partner, she availed a loan of Rs 10,000 to purchase a cow and expand her dairy farming business. However, she decided that it made more financial sense to set up a small grocery shop as there was none selling daily essentials in the village.
Presently, she runs this shop together with her husband. She pays Rs 500 as monthly rent and sells items such as shampoo sachets, small packs of biscuits and chips, paan, chewing gum, chocolates etc. Some of her most loyal customers are children who regularly spend their pocket money at her shop. After setting up the grocery store, Shanti’s income has definitely seen a rise. During festive months, she even makes a profit of Rs 1,500-2,000 per month. ‘’All our stock gets sold in a day’’ she stated to Rang De team members Sowmya and Pramod who visited her in August.
She has learnt to recognise the needs of her customers and frequently replenish fast-moving goods. Shanti does not keep track of her net income but has a rough idea of her receipts. She also has a bank account that she operates infrequently.
Her financial literacy would have been stronger had she received mentoring support from Nav Jagriti. However, we are looking to study the differential impact of mentorship across geographies where Rang De loans are disbursed and thus Nav Jagriti has been instructed not to provide mentoring support to some borrowers, including Shanti.
Even in the absence of formal mentoring support, Shanti immensely respects Nav Jagriti’s staff member Manjula Devi. ‘’This has all been possible because of Manjula didi’’ Shanti said.
She is also grateful to her husband. In Bihar, women often look to their husbands whenever a question is posed to them. While interacting with the Rang De team, Shanti brought a confidence of her own while her husband looked on encouragingly. He even supports her by taking turns to go to the market.
In the future, Shanti hopes to expand her tiny grocery store by selling rice and dal which have better profit margins. As someone who has adapted her life to the flow of the river, we are sure that Shanti has the wherewithal to turn her hopes into reality. We wish her the best of luck. An independent lady, Shanti have been rearing cows and selling milk for six years. One challenge she face is that she is limited by the amount of milk she can harvest each time, thus limiting her income, as she only had one cow. She intends to use the loan amount, and her own contribution, to purchase another cow so that she can increase her yield. 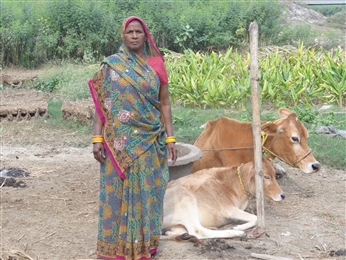 Evaluated 1421 days ago by Soumya and Pramod