Written by Thrishika Kanthraj
Rang De team members Soumya Jayaram and Pramod Arsid visited Sitamarhi district in Bihar this month to meet borrowers associated with Nav Jagriti, our impact partner that works with disadvantaged communities in rural Bihar. Tara Khatun was one of the borrowers that they had the opportunity to talk to.
A 47-year-old, she had availed a loan from Rang De for the purpose of purchasing some goods for a small grocery store that she was trying to keep afloat. She was initially hesitant to avail a loan in light of a harrowing experience with a moneylender, whose terms were that she add Rs 4 for every Rs 100 that she repaid. However, when she was informed that she could avail a Rang De loan at an interest rate of 10% flat, she realised that it made good financial sense to take it.
Soon, she also started to realise that reviving the grocery store as well as recovering her losses from it might be an extremely uphill task. Thus, she decided to also undertake a new venture – tailoring. While Tara knew sewing even before her marriage and was not new to it, she decided to take it up out of sheer necessity.
In a region that is infamous for distress migration, it fell upon Tara to take care of the home while her children found work in distant cities. Five of her six children are presently in Surat. The youngest child who lives with Tara, is in school. Tara utilised the proceeds from the loan to purchase a sewing machine costing Rs 2,000 and the balance towards her tiny grocery store. In her house which is designed to have two levels as protection from the floods, Tara tailors on her sewing machine on the upper level while the store is on the lower level.
In the midst of their conversation, she headed up to show Soumya and Pramod a salwar kurta that she was working on. An elegant and intricate design, Soumya wondered how such good work is rarely available even in big cities. The disparity in remuneration was visible too; while Tara charges just Rs 20 for stitching a blouse, she could earn twice or thrice the amount in the capital city of Patna.
Tara knows that the quality of her stitching is better than that offered by other tailors in the community and this is how she knows that she will thrive.
An enterprising and industrious woman, her confidence shone through in her work as well as in the few English words that she peppered her conversations with. Another striking quality that Pramod noticed in Tara was her unrestrained boldness.
‘’Even if my husband and sons do not send money home, I earn enough from my two businesses to meet my personal needs’’ she said.
She is even planning to teach other women in the community the tricks and trade of tailoring.
While it is Rang De’s vision to make poverty history in India, we often realise that alleviating poverty is much more than just financial well being. Intangible fringe benefits such as self-confidence, business acumen and a spirit of survival are perhaps just as important. Tara Khatun and her husband have left no stone unturned to ensure that their children complete their education. And the children have not disappointed them. The parents have ensured that they have enough money in the house to manage the basic expenses, leaving the children to concentrate on their studies. The oldest of whom have already completed their matriculation with flying colours. Three years ago when Tara Khatun was finding it difficult to meet the household expenses with the income from her husband’s labour work, she decided to start her own business. She started a small grocery shop in the village with whatever capital she could manage. In the short time since then, she has managed to establish her business quite well. She knows her customers and their needs quite well now. But she feels she can increase her profits if she was able to buy goods in wholesale instead of from the larger grocery shop in the neighbourhood that she currently buys from. But she does not have that kind of capital to spare. When Rang De offered her a loan for this, she grabbed the opportunity. Her loan of Rs.10000 will be used to buy more goods at lower prices from the wholesale market. She will also increase the basket of goods so that she can serve more customers. This would translate into more profits and a better life for her family. 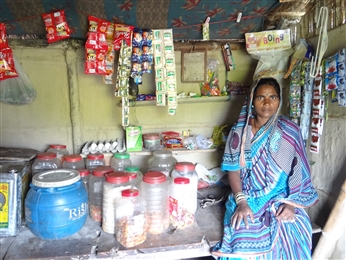 Evaluated 1274 days ago by Soumya and Pramod