Written by Aakash Bagchi
What is the epitome of luxury for you? A seven bedroom apartment? A Lamborghini? How about a dining table?
Yes, a simple dining table.
Something which we take for granted in our daily lives is the ultimate luxury for Menka Patra, living in Nayagram village in Jharkhand state.
When she was young, her father used to say, ”Oh, look at them - they have a dining table!” For him, dining on a table instead of sitting on the ground conveyed a sense of dignity that he felt he could never had. This thought has always been in Menka’s mind since her childhood.
Located about two hours away from Jamshedpur, on the National Highway 33, on the banks of the Subarnarekha River, lies the East Singbhum district, known for being rich in minerals.
Menka’s idea of luxury gives us an idea of how different life can be in such rural districts.
Menka’s association with Rang De began 7-8 months ago when she first got in touch with one of our field partners, Kalamandir. She took a loan of Rs.8000, of which she has already repaid half as of January 2016, with an exemplary repayment record.
She started a tailoring business with the loan amount - a sewing machine cost Rs 5600 while the rest of the amount was spent in buying materials like cloth etc.
Her monthly instalment is Rs.733 which, according to her, is not difficult as her business is booming, helped by the fact that she hardly has any competition in the area.
As much as we congratulated her on her progress and tried to convince her that it is the fruit of her efforts, she still believes that she is lucky as everything happened at the right time.
As it happened, she had just shifted to a new home, after living in a rented accommodation for a long time, and found that there were very few tailors in the area. The germ of a business idea formed in her mind. She then went all the way to Baragoda in neighbouring Odisha state to get training in tailoring. Doing the machine work was easy but what was difficult was getting the stitches in the right places and developing the skill. Menka makes and sells petticoats in her small workshop.
She sheepishly showed us the first petticoat she had ever made - after we got over the surprise of her having kept it all this time, we had to take her word that it was a petticoat as it looked nothing like the finished petticoats lying in her workshop, waiting for customers.
She certainly has come a long way.
In the six months since she has started her business, she is already earning Rs.1200-1500 per month. She manages to sell about 20 petticoats per day and earns Rs.20 on each. But the profit margin tends to go down when customers insist on using their own cloth.
The nervousness of a new entrepreneur has been replaced by a buoyant confidence.
She now plans to save some money of her own, and maybe look for another loan to buy two more machines - one of them would be a Pico machine while the other would be a regular one like the one she has.
She estimates another loan of Rs.20000 capital should serve the purpose.
Right now, with family expenses and loan repayment to think of, she is not able to save much.
She targets earning at least Rs.4000 per month for a comfortable life for her family, including a proper education for her children but things are looking much better for them now. She even asked a carpenter and got to know that a dining table would cost Rs.3500-4000.
One of the first things she invested in after beginning her tailoring venture was a new toilet.
Now, her daughter does not have to face the embarrassment of using the outdoors for daily ablutions.
Earlier, with her husband’s income of Rs.6000 working as a labourer, making ends meet was a difficult challenge - having a home with a toilet was a luxury they could ill-afford.
Now, both her children are in school, surprising her daily with all the new things they learn.
Menka’s life is back on track and her future looks bright.
Rang De is proud to be associated with strong-willed people like her.
With a smile, we took her leave and we are confident that it won't be long until she fulfils her dream of having dinner with her family at her very own dining table.
Her father would be so proud. 31 year old Menka Patra lives in the village of Nayagram in Jharkhand. She has been stitching clothes for the last 8 years. Sales of clothes stitched by her contribute towards her family income and support the education of her son and daughter, both of whom are currently studying in school. She has good stitching skills and clothes stitched by her are very popular and in good demand in the nearby area because of their good quality. Menka wants to invest in her business by buying more raw material like fabric, threads. For this, she has applied for a Rang De loan of Rs. 8000. This is her first loan from Rang De. 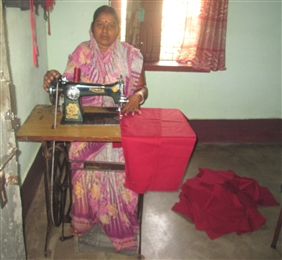 Evaluated 2569 days ago by Pramod