Written by Nishtha Sood
This is the story of Shankari, a woman from the Mohanpur village in East Singhbhum, Jharkhand, who decided to break the vicious circle of poverty by starting her own paper-bag making business. For this, she took a loan of Rs. 8000 from Rang De and purchased paper and stitching materials.
Working in this activity for the past 5-6 years, she is now looking forward to expanding it as well.
Currently, she is also a part of a 10-member SHG (self-help group), which is a body of 10 women who decided to support each other through financial and other ways.
Her efforts were successful to some extent and her husband, who was previously employed as a farm labourer, has now joined her venture.
Her SHG has been recognised by the local government that and appreciated for its integrity and diligence as well as the efforts it puts in to empower people as they have also been provided with a ration shop.
The responsibility of running the shop is divided among the members of the SHG - every day, one person runs the shop while another works as an assistant.
Now, with the help of this shop, each member of the SHG is able to save at-least Rs. 100 a month. Shankari still has a long road to tread before achieving self-sufficiency.
She has to sell her paper bags to the same company from where she purchases the paper. This company, in turn, sells it in the market, reducing the profit margin and preventing Shankari from getting the full value of her work.
The company believes that if free paper were given to the labourers for making finished products, they would not return it to the company hence they have made the buying of paper mandatory for each worker.
The presence of a middleman has prevented her from earning more and, as a result, Shankari's daughter had to drop out of school. Shankari wants her daughter to study further but is not in a condition to finance her education yet.
Disheartening as Shankari's story may seem, we can take inspiration from it. It is appalling to see the amount of inequality that exists within our country yet Shankari has created an opportunity out of whatever meagre resources she has at her disposal. Her story comes across as a ray of hope to Indians who dream of an equal and just society.
Mahatma Gandhi once said, "the future of India lies in its villages".
We all our guilty of ignoring the villages in our quest to lead India on the path of modernisation.
While focusing on economic growth, increasing GDP and international trade, we often ignore human development, especially the rising inequality and poverty in our country.
While it would be untrue to claim that the government has not done anything to uplift the villages, the efforts are not enough especially given the scale of the problem and the paucity of resources.
As responsible citizens, it is our responsibility to lead the country on a path of sustainable development, and this can only be achieved through empowering villages.
Ran gDe is just one of the attempts at bridging the wide gap between urban and rural India and we are happy to see Shankari take a step towards a sustainable future where she can be self-reliant and also a source of inspiration for others in her village. As we shun plastic bag in favor of eco-friendly living, paper bags have become the need of the hour. Our neighborhood stores are stocked with these carriers, but have you wondered where these come from? Small entrepreneurs like Shankari Shit are the people behind the scenes. The resident of Jharkhand's Mohanpur village has been making paper bags for almost a decade. The demand for paper bags is high and yields profits. But household expenses leave Shankari with little capital and she needs help to invest in her next batch of products. A loan of Rs. 8000 will allow her to travel to Kolkata and buy raw materials. With this investment she can make a fresh batch of bags and sell them in the local markets. Shankari’s work is not easy, but her income makes a great difference to her family and the higher education of her daughter. 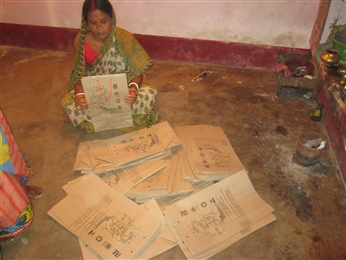 Evaluated 2628 days ago by Pramod