In a city like Bangalore, teeming with people, it is no wonder that the garbage situation is fast spiraling out of control. The city would sink in a cesspool of waste were it not for the efforts of the BBMP workers, waste pickers, waste segregators and waste management organizations such as Hasirudala.
Hasirudala is a non-profit organization that comprises of waste pickers and waste segregators as its members. By gathering under the umbrella of a single organization that is dedicated to their upliftment, many informal waste pickers not only earn a better income but are also assured a steady stream of work. The organization provides them with a space where their voices are heard and their concerns addressed.
For women such as Meenakshamma Madhurai, a membership at Hasirudala has helped her not only earn more but has also given her the opportunity to access low-cost microfinance.
52-year-old Meenakshamma lives with her husband, daughter, son-in-law and two grandchildren, Dharshini and Manonmani. The children are presently enrolled in Shanthi Niketan, a private school in LR Nagar. Dharshini is in class 2 while Manonmani is studying in class 5. The two girls enjoy school and are good students. It is quite clear that Meenakshamma dotes on her granddaughters and is very eager to see that they get the best education that the family can afford. Although she is a first-time Rang De borrower, she has taken loans in the past in order to pay their tuition fees.
The family works hard to send the girls to school and even pays for extra tuition classes for them. While Meenakshamma works as a waste picker, her husband is a coolie and her son-in-law fixes tiles for a living. With three earning members contributing to the household income, it was decided that Meenakshamma’s daughter would tend to the home and care for the girls.
Since the atmosphere at home is positive towards learning, both children have big dreams and are working hard right from the beginning in the hopes that one day, they will reach their goals. Manonmani would like to be an engineer while Dharshini dreams of being a teacher.
With help from Hasirudala as well as other Rang De field partners, we hope to extend affordable microcredit for education to more people so that every child is provided with the opportunity to grow and learn.
Thank you for investing in Meenakshamma’s loan. If you would like to help other individuals in need of education loans, please click on the link. 52 years old Meenakshamma Madhurai lives in Neelasandra, Bangalore with her husband and 2 Grand daughters of 7 & 10 years old. Her 55 years old husband works as a Coolie and earns Rs.84000 in a year. Her 2 grand daughters, Manonmani & Dharshini studies in class 5th & class 2 in Shanthinikethan Pri School. Meenakshamma is also involved in Recycling work and her annual income is Rs.84000. Their annual expenditure is Rs.72000 after spending on their basic necessities. Still they have to travel beyond 5kms radius to access water source and lacks any primary Medical care centre. Both of them is working hard at their old age to provide a better future to their grand daughters. But to manage the increased expenses in education, Meenakshamma has to apply for an Education loan of Rs.20000 which includes School fee, books and uniform cost of both her grand daughters. Manonmani wants to become an Engineer whereas Dharshini aspires to be a Teacher. Your invesment in her Education loan will be a big relief for the Grand parents and they will be able to provide a better education to the kids. 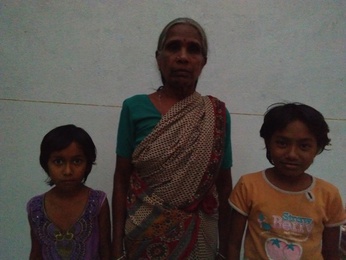 Evaluated 902 days ago by Ahinsa Sharma & B. Praveen Kumar