In Bangalore, the contribution of waste pickers and sorters is slow in receiving the consideration they deserve for the services they render to society. They provide alternative waste management options which include the combined efforts of segregators, scrap dealers, and recycling factories.
Their lives outside of their jobs are gradually starting to see improvement. Part of this is due to organizations such as Hasirudala which work towards integrating the informal waste sector under one banner and providing them with stable incomes and facilitating access to social security. Better incomes have led to many members being able to provide better for their children, as is seen from the rising trend in private school enrollment.
For 46-year-old Savithri who is a waste segregator, becoming a member of Hasirudala has been a sound decision.
Savithri lives with her family in Jolly Mohalla, a neighborhood in Sultanpete which is known for its scrap dealers and waste markets. Her home is close to St.Theresa’s school, a private school where her youngest child is studying. She was able to enroll Subiksha here after availing an education loan from Rang De.
During an interaction with Savithri, our field team learned that the loan was used to pay for little Subiksha’s uniform, books, and tuition fees. She told us that while the installments were convenient to pay, she required a higher loan amount since educational costs keep increasing. We were glad to hear that 5-year-old Subiksha had adapted well to school and was an eager kindergarten student who loved to play with other children.
Savithri has two older children, a son and a daughter who are also studying.
Her husband is a coolie and also does waste segregation on a part-time basis. Although the couple’s combined monthly income is roughly Rs.9000, it neighborhood depends on the value of the waste collected and hence varies from month to month. Through Hasirudala’s intervention, the flow of income has become more stable. However, the couple have not reached a stage where they can save any of their earnings.
When our field team asked her why she had not considered admission through the RTE quota, she responded that it was a long-drawn process that required a lot of paperwork, most of which she did not have. Since schools were quick to reject applications that had even minor differences on certificates, it made little sense to Savithri to apply for an RTE seat.
Besides this, both she and her husband are not salaried workers and earn only on a day-to-day basis. The time required to gather the required documents, fill forms and wait in line would entail a loss of income, which they could not afford. Savithri hopes to avail a few more education loans from Rang De in future to ensure that her daughter can continue at her present school.
Thank you for investing in Savithri’s loan.If you would like to help other individuals in need of education loans, please click on the link. About Savithri - before Rang De Loan

In spite of being uneducated, Savithri and her husband know the importance of education in life. Savithri lives under a thatched roof in Bangalore with her family. Her family comprises of her 50 years old husband who is a rag picker and three children. His 21 years old son Vijay is studying in 10th standard whereases her two daughters 19 years old daughter Sarojini and 4 years old Subeeksha studies in 10th and LKG respectively. The family goes through a lot of struggle in their daily life from bringing water from 5km of radius to having access to public toilets. Ragpicking being the only source of income in this family Savithri cannot think of saving Rs.10,000. Therefore, she is has applied for a loan of Rs.10,000 . Availability of the credit will fulfill her dream of educating her children. Education is the movement from darkness to light. Help this family in moving out of the darkness by investing in their children's education. 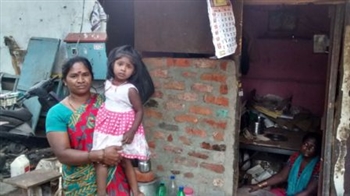 Evaluated 1030 days ago by Ahinsa Sharma & B. Praveen Kumar