Written by Kavya Rao
Rang De team member Pramod had to walk three kilometers to reach Paraitalai in Mandla district in Madhya Pradesh. The roads were inaccessible due to rain and people were left with no choice. Mandla, a remote district in Madhya Pradesh has a forest cover of nearly 60 percent.
A majority of the residents of this area are from a tribal community and never received much education. With barely any connection to urban areas, the people of Mandla still follow archaic traditions. Men and women do not have equal rights and women spend most of their time at home.
Our field partner Udyogini operates in this area and works to empower the women of Mandla. All of the borrowers from Mandla brought in by Udyogini are women, most seeking to start a new business.
It is really hard to fight against inequality. Sunita Gond has fought against this inequality and is now the proud owner of two businesses. Furthermore, she enrolled her daughter in a private school and her sons in a government school because Sunita realized that her daughter showed more potential. Enrolling them all in a private school was not a financially viable option.
Sunita runs a village level service centre (VLSC). VLSCs are usually set up so that the people of a village can purchase everything in one shop. Sadly for Sunita, there are a number of VLSCs in her village and the competition is high. With hardly any profit from her store, she started questioning her decision of starting the VLSC as well.
Before setting up her shop, Sunita attended training sessions at Udyogini where she learnt the basics of running a business. Based on those teachings, she decided to expand her business. She spent days trying to figure out a plan for her business when she came across an idea. The neighbouring VLSCs were mostly run by Brahmins who refused to sell eggs in their shop. However, the demand for eggs in their village was high and this gave Sunita an idea for a profitable expansion. With a Rs 10,000 loan, she purchased a stock of eggs. Her income soon increased from Rs 500 to Rs 1000 every month.
Sunita, who studied only up to class 5 is proof that entrepreneurship is not inborn and people can achieve anything if they make the effort. Udyogini encourages borrowers to carry on more than one business so that they can earn a greater income. Sunita runs a small poultry farm alongside her shop and hopes to expand it in the future.
Her husband Rajendra runs the only flour mill in their village. The village does not receive continuous power supply and this affects his income. He says that if they start receiving power regularly then he will definitely be able to earn more profit. The other problem he faces is that people in his village still believe that flour from a hand mill is tastier.
Rajendra is a supportive husband and even helps Sunita when he has time. The couple look back to the time when Sunita was a homemaker and are extremely grateful to Udyogini and Rang De for bringing about this change.
Sunita has fought against all odds to become independent. We are happy to be associated with women like her. We hope to be able to support more women fighting inequality and who seek social and financial independence. Sunita has always supported her husband in running her family smoothly. But now looking at the growing needs of her children she is quite worried. With only agriculture they barely manage to feed themselves for 7-9 months in a year, the grocery shop supports them a lot more that way. She would like to increase the services from her outlet and begin aggregation services of Non Timber Forest Produce and seasonal crop from the village. She will invest Rs. 8,000 to the loan of Rs. 10,000 which she will borrow from Rang De. The outlet will try to serve the multiple needs of the people from the village so that they do not need to travel 3-4 Km for all their petty needs. 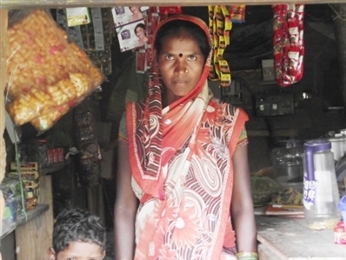 Evaluated 1555 days ago by Pramod