Written by Lydia Paulraj
Ever since 2014, India has seen a spate of farmer suicides brought on by unpredictable weather patterns and crop yields. What began as a few stray incidents turned into a full-fledged catastrophe with thousands of distressed farmers drinking deadly doses of pesticide that led to their swift death.
Much discussion has been focused on smallholders cultivating cash intensive crops like cotton and marginal farmers who own less than an acre of land. Gurram Vasantha’s husband from Warangal, Telangana was a case in point.
Since he was a landless farmer, he took an acre on lease in order to cultivate cotton. Twelve years ago, the crop was washed out during heavy rains. Desperate to salvage the situation, he renewed the lease for a few more seasons in order to repay the loans he had previously taken from moneylenders.
The seasons that followed brought no change in his fortune and Vasantha’s husband found that he could neither repay the moneylender nor provide properly for his family. At the time of his death, the youngest of his two daughters was only 25 days old.
Since then, Vasantha has been working as a daily wage laborer to support her children. She has enrolled them in a private school where one daughter is sponsored by a teacher and the other, by the school itself. This has been a source of a relief to Vasantha who would not have been able to meet educational expenses from her earnings of Rs.4000 which primarily go towards everyday expenses and paying off loans.
Till date, she has managed to repay Rs.50000 of her husband’s outstanding debt of Rs.1.7 lakhs.
In order to supplement her income, she received a special category livelihood loan of Rs.25000 from Rang De as well as Rs.10000 from a self-help group. The funds went towards purchasing a buffalo. It is expected to begin giving milk within 2-3 months.Presently, Vasantha pays the installments on this loan from the wages she receives.
As a member of a self-help group for the past 12 years, she deposits Rs.100 every month. She has saved around Rs.3000 – Rs.4000 over the years. Although Vasantha has a bank account, she is unable to maintain any savings in it.
She lives in a thatched home with no electricity and recently constructed a toilet under the Swach Bharat Abhiyan scheme. A fixed amount of Rs.12000 is dispensed to all those who avail the benefit under the scheme and the remainder is paid out of pocket to the builder. In Vasantha’s case, he charged her Rs.2000 instead of Rs.5000 which was his standard rate.
In the coming months, Vasantha hopes to increase her earning capacity by selling buffalo milk and intends to use the money to repay her husband’s debts.
Thank you for investing in Vasantha's loan. If you would like to help other women from Telangana, please click on the link. Note: This a special category of livelihood loans that are being facilitated at 5% flat p.a. to the borrower. In order to keep the interest rate this low, the return to social investors has been reduced to 0% for this loan.

Gurram Vasantha is a 36-year-old widow from Bodduchinthalapalle, Warangal. She lives in a thatched roof house along with her two daughters of age 15 and 13 years. She had to discontinue education at an early age of 14 and was married off at 18. Unlike her, Vasantha wants both her daughters to complete their education and live an independent life.

She is striving hard to provide a stable life for her daughters since her husband passed away. She has decided to start a dairy farming business by purchasing a buffalo for which she wants to borrow a loan of Rs. 25000/-. The demand for buffalo milk in her village will ensure a stable income throughout the year for the family.

Invest in her loan today to help her in empowering her daughters as she empowers herself with financial independence.

Rang De is working with its partner organisation, Sarvodaya Youth Organisation, in Warangal district to provide low interest loans to women whose husbands took their own life due to crop failure and mounting debts. Our Rang De loans will help these women invest in an income generating activity and thus restore livelihood security to their vulnerable families. 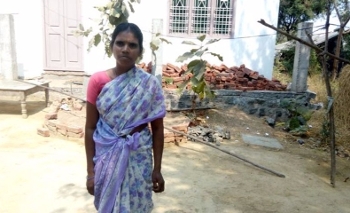