Written by Lydia Paulraj
The village of Pasragonda is located in the Atmakur mandal of Warangal, Telangana. Our team made a visit to the area in order to meet a group of borrowers. The women we met with were widows, the wives of debt-ridden farmers who committed suicide in the wake of a farm crisis that shook the nation.
The backs of these women are bent with the weight of multiple responsibilities. They look after home, farm, children and are engaged in the near-impossible task of ridding their lives of debt.
Many like Madipelly Sharadha, feel bitter when they recall how their husbands failed to consult them before approaching usurious lenders. Sharadha herself is very cautious in monetary affairs and maintains a careful watch on expenditure.
While speaking to us, she complained of how women do not save even a drop of milk to make a cup of tea for themselves while the men go out and drink away their earnings, never sparing a thought for their families.
In Sharadha’s case, her husband had incurred a debt of Rs.5 lakhs after leasing 4 acres of land. He tried cultivating turmeric, banana and cotton but received very little yield over a period of two years. At the time of his death, Sharadha chose not to take any more land on lease and began the slow and painful task of repaying moneylenders. Sharadha has found support through Sarvodaya Youth Organization, an NGO that works tirelessly to empower women by helping them set up sustainable livelihoods.
At the time of receiving a loan of Rs.50000 in order to buy a buffalo, a visiting politician offered to place her son, who is studying in the 9th standard, in a hostel. Sharadha thought that this would be a suitable arrangement for her daughter as well, who is sickly and finds it difficult to walk long distances. She used Rs.45000 to purchase the buffalo and the remaining Rs.5000 to pay for her daughter’s tuition fees.
Till date, Sharadha has managed to clear half the debt owed to lenders using the income generated from the sale of buffalo milk and through daily wage labour. The buffalo gives around 4 litres of milk per day which is sold at Rs.40 per liter. She also receives a widow’s pension from the government.
Aside from the livelihood loan, Sharadha has also taken a loan of Rs.30000 from a self-help group to meet her children’s expenses. She makes monthly payments of Rs.1300 towards the educational loan and Rs.2350 towards the livelihood loan.
Although the installments are very hard for her to repay, she is firm in her resolve to educate her children. She does not worry about whether her daughter will be able to use it or not but believes her children should successfully complete their schooling and maybe if she can manage it, study further as well.
Thank you for investing in Sharadha's loan. If you would like to help other women from Telangana, please click on the link. Madipelly Sharadha is a 40 year old widow who resides in a village in Warangal district with her two children, Shiva and Srujana. Having lost her husband at a young age, Sharadha took control of the family's agricultural land and has been supporting the family through farming and animal husbandry.

Sharadha has also been repaying the loan that her husband had taken from a money lender before his death. Repayment of this high interest loan has meant that despite working extra hard she still hasn't made much progress in retiring the principal amount of the loan.

She has therefore requested for a loan of Rs. 50000/- which will allow her to repay a bulk of her current outstanding and thus ensure that her hard work contributes to her family's well being rather than lining the wallet of a money lender.

Do invest in her loan and help Sharadha escape the clutches of exploitative credit sources. 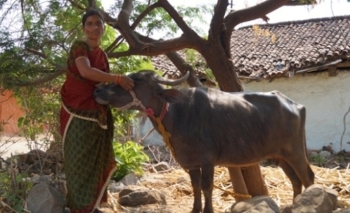