The village of Alamchandrapur lies on the outskirts of Akbarpur, approximately 45 km away from Kanpur in UP. It is here that a first-cycle borrower Pooja Devi lives with her husband and infant in a government housing society. Several flats in the society are rented out to men employed at factories situated along the outskirts of Kanpur making its location ideal for an easier commute.
Pooja’s husband too works at a factory and earns around Rs.7000 per month. His income falls short of the household requirement but thanks to Pooja’s efforts, the family is able to manage reasonably well.
Unlike most of our borrowers in the area, Pooja is educated and holds an MA. However, Alamchandrapur has limited opportunities and finding suitable work proved to be a challenge for her. As a new mother, much of her focus has been on her baby leaving a little spare time during which she runs her tailoring shop.
Pooja learnt how to sew when she was younger and is completely self-taught. She used to watch other women sewing and mending and practised different techniques at home till she became confident of her skills. She eventually put her interest aside as a hectic college schedule did not accommodate time for hobbies. It was only after getting married that she took up sewing once again and thought it would be a useful way to earn a living.

A Rang De loan helped her buy a sewing machine with which she started her own tailoring unit at home. It has been four months since she began taking orders. Presently, she earns only Rs.1000 per month as the business is in its nascent stage.
We were delighted to hear that Pooja also conducts coaching classes for children living in the housing society. She teaches Hindi and English to students from kindergarten through class 8 and does not charge any fixed amount as fees. In return, the children pay only as much as their families can afford. Her income from tutoring amounts to Rs.2500 thus providing her with the means to save. She deposits Rs.2000-Rs.3000 as savings every month in her bank account as she strongly believes in conscientious saving.
She seemed familiar with banking terms but was rather wary about getting a life insurance policy having been duped out of Rs.7000 by an insurance firm that eventually shut down without returning her investment. Fortunately, she trusts the bank and her SHG with the money that she deposits on a monthly basis.
When we asked Pooja about her future plans, she told us that she wanted to start training other women in tailoring so that they too can earn a living. If all goes well, she also plans to look at the scope of undertaking bulk orders from garment shops in Akbarpur.
Pooja’s focused and steady approach is certain to take her a long way. We hope that her plans meet with success and that she continues to explore new opportunities that fully utilise her potential.
Thank you for contributing to Pooja Devi’s loan. If you would like to help other women from Uttar Pradesh, please click on the link. Pooja Devi had applied for a Rang De Loan for which the current status is MATURED.
The purpose for taking the loan: Stitching and tailoring
At the time of taking the loan her annual family income was Rs.42000 and the Monthly Family expense was Rs.3333 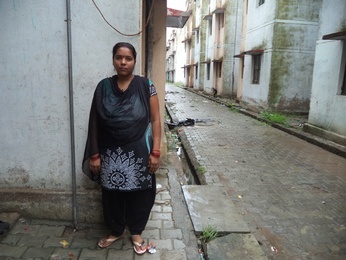 Evaluated 1544 days ago by Ahinsa Sharma