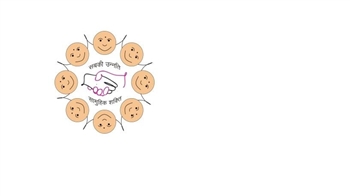 Saheli Samiti, Dholpur was established in the years 2003-04. It was registered under the Societies Registration Act Of Rajasthan - 1958. Saheli Samiti is a federation that works at the village level to encourage women to understand the importance of sustainable livelihood and also help them have one. Promoted by PRADAN, the federation works in three blocks of Dholpur District (Dhoulpur, Badi and Basedi) towards women empowerment, agriculture & dairy farming, gender issues and other social issues. PRADAN is a voluntary organisation established in Delhi in 1983. It was pioneered by a group of young professionals, all of whom were inspired by the conviction that individuals with knowledge, resources and empathy for the marginalised must work with communities at the grassroots level in order to help them overcome poverty. PRADAN believes that the path towards conquering economic poverty is through enhancing the livelihood capabilities of the poor and giving them access to sustainable income earning opportunities. Written by Aakash Bagchi
On the banks of the Chambal river before it flows into the infamous ravines lies Dholpur, a town bordering Madhya Pradesh in the easternmost parts of Rajasthan. It is known for its red sandstone, famously used for building the majestic Rashtrapati Bhavan in Lutyens’ Delhi.
Fourteen kilometers northwest of Dholpur along National Highway 3A is a small village called Nagla Bhadoriya, which is home to less than 200 families. This village is home and hearth to Machhala Devi, the protagonist of this story.
She lives in a large family along with her husband and five children. In January of this year, she took a loan of Rs.30,000 from Rang De and invested it in buying a buffalo to enhance her dairy business. This was facilitated by Saheli Samiti, a Rang De field partner.
Of the 19 borrowers that we lent to in the hamlet, Machhala Devi stands out. She is one among very few of these borrowers, who we during the course of our audit found out was actually benefitting for themselves.
A brief chat with the borrowers pointed to a problem that we have known for years. The villainous moneylender goes by many names but leaves the same despondency and misery in his wake. Here, he is the ‘Dudhiya’, the big milk trader in the region.
Now, a buffalo that yields 8-10 litres of milk per day costs upwards of Rs.50,000. Through Rang De, the borrowers get a loan of upto Rs.35,000. Borrowers such as Machhala Devi who can fund the rest from their savings are able to earn a reasonably stable income but the vast majority have to borrow the balance amount from the Dudhiya.
This Dudhiya, instead of collecting cash payments in return for the loan, collects the milk that the buffalo produces... for as long as he may please.
Those borrowers who manage to avoid the Dudhiya can only do so by buying a pregnant buffalo which, though cheap, does not yield any income for the first 4-6 months.